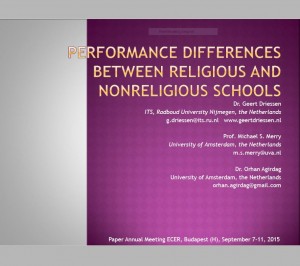 “Notwithstanding dramatically low levels of professed religiosity in Western Europe, the religious school sector continues to thrive. One explanation for this paradox is that nowadays parents choose religious schools primarily for their higher academic reputation. Empirical evidence for this presumed denominational advantage is mixed. We examine and compare several studies purporting to show a denominational school effect, and then turn our attention to the Dutch case. Owing to its longstanding and highly varied denominational school sector, the Netherlands arguably provides a unique context in which to examine whether there are school sector effects. In this study multilevel analyses were performed. Data include 19 cognitive and non-cognitive outcome measures in 2011 administered to 27,457 pupils in grades 2, 5 and 8 of 386 primary schools. Results show that after controlling for input differences at pupil and school level no substantial output differences between religious schools and public schools remain. However, Islamic schools appear to be one important exception which turn out to have a great value-added potential. Implications of these findings are discussed.”